Project STurdteen, Plumbing the Motor and Getting Her Ready to Run!

So we have rebuilt the engine and the transmission for Rathyna’s Turd.  Now came the job of putting the engine back in the car and undoing the clusterfuck of plumbing that had been patched together by god knows who.  The previous plumbing was cludged together from the lowest cost junk that whoever had been working on the car was able to get their hands on.  One thing we have noted over the years is that 90% of DNF’s in racing is due to faulty plumbing, wiring, and poor cooling.  This is why we have always advocated that these are areas where you don’t want to skimp out when it comes to car prep. Rathyna’s car didn’t have much in the way of cooling either, some sort of bootleg Chinese radiator and no oil cooler. So we decided to take pity on Rathyna, bite the bullet and fix all of the cars plumbing and cooling issues with some help from Canton Racing Products, Earl’s, Enjuku Racing, Koyorad, Spearco, and HPS. 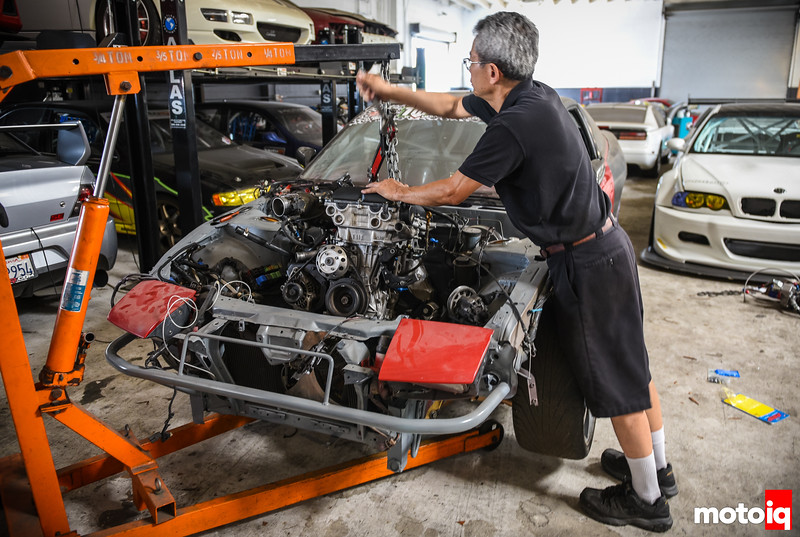 Step one was to get the fresh engine and trans in the car.  We had pounded up the trans tunnel in a few places beforehand to make this much easier.  It was straightforward to get the engine in and it didn’t take long.

Rathyna’s car had poor crankcase venting, some idiot has plugged her crankcase vent and one of the valve cover vents. The only vent the engine had was a long soft 3/8″ tube going into an energy drink bottle! This would cause crankcase pressure to build up causing the oil to leak out of every part it could.  The crankcase pressure also probably did wonders for the ring seal and oil consumption.  To make matters worse the pressure would cause her dipstick to shoot out of its tube with more oil!  We properly vented the crank and diverted the crank gasses into this Canton Racing Products catch can, part# 23-030.