Upgrading the WRX brakes with StopTech

After almost a quarter million miles of neglect and abuse on our WRX, it was time we started upgrading the Subaru WRX brakes.   The brakes on Ian’s trusty WRX have seen better days.  We chose StopTech as the best big brake kit for the WRX.  Replacing all the brake hardware with an upgraded 4 wheel system that is nothing short of fantastic, especially when compared to the stock system. We have always felt that the base WRX is a great little car that punches above its weight class.  Its potential has always been overshadowed by the presence of its big brother the STI.  The WRX brakes are an example of this. The STI gets much better brakes from the factory, decently sized Brembos while WRX languishes with smallish two-piston floating caliper front and single piston floating rear calipers with small rotors and amazingly, a small and solid non-vented rear rotor!  If any car can benefit from a StopTech brake upgrade kit its a base GD WRX.

Ian noted to us that when he was younger and used to do canyon runs and drive more aggressively, that his brakes would fade at an alarming rate to the point of being scary.  Well with our planned track intentions with grippier tires and more power with our planned engine rebuild, this was going to have to change.  Help give us the best WRX brake upgrade, StopTech! 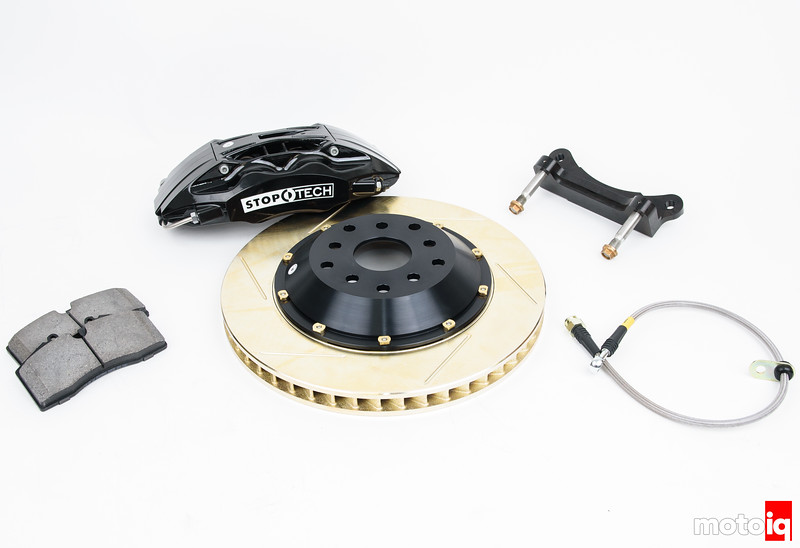 The StopTech brake kit for WRX – 83.836.4300.53 starts by upgrading the WRX brake system with front ST40 4-piston fixed caliper and a 328mm vented rotor.  We opted for StopTech street performance pads since our new brakes are so much larger than stock.  The StopTech BBK also has a DOT approved braided steel brake line.

Included in the WRX brake upgrade kit is the StopTech Aerorotor is a two piece part with an alloy center hat. This saves a lot of weight as the center of the stock rotor is a chunk of cast iron. The rotor’s iron alloy has been selected for its coefficient of friction and wear-resisting properties over a wide range of temperatures. The rotor has radial slots on the friction faces to evacuate gas from vaporizing pad material during high-speed applications to improve bite and to have consistent braking at high temperatures.