We love the old DC2 Integra, we have one as a project car, and it’s a blast to drive on the street and on the track.  With its high revving VTEC B18C engine and manual transmission, it’s a light and nimble car that is very engaging for the driver.  It was the car that made the Acura brand.  Young people would buy Integras then buy the Legend or the NSX they grew in income and or family size.  The Integra was instrumental in making Acura customers for life and establishing brand loyalty. The whole Acura brand was about fresh, sporty, affordable neo luxury, the brand had status and people wanted to buy the cars.

Then Acura/Honda lost their way, Acura started to produce decontented nondescript sedans with boring names, heck we can’t even remember the names of any of them.  Their old customer base started to aspire and purchase cars like BMW, Mercedes, and Audi. In fact, in many discussions with all sorts of people of many demographics, no one even wants an Acura anymore when talking about new car purchase intent.  No one can even recall the name of any Acura model.  Growing up we used to know families that had 3 generations of loyal Honda and Acura cars, they simply would not look anywhere else!  Nowadays that never happens.

We were stoked when we heard the NSX was going to be re-issued. If Acura even had a clue, they would have built on the car’s DNA and made a lightweight, mid-engined driver’s car powered by a 600 hp NA high revving 5 liter V10, a tribute to the brand’s F1 heritage.  Something along the lines of the Porsche GT3 except it would smoke the GT3 for around the same price.  Honda/Acura could have engineered this with ease.  If they bothered to clinic the car, they would have known this is what the NSX buyer wanted.

Instead, they made an expensive, bloated, heavy, packed with tech and gadgets and electronic drivers aids, V6 Turbo hybrid.  It was expensive, not any faster and slower in some ways than the cheaper Nissan GT-R, and had little appeal to the fans of the NSX.  We know so many people who were ready to buy the new NSX but were let down and disappointed. Seriously, they all went out and bought a GT3 instead. The NSX sold awfully and the used prices are pretty low so they are a bargain on the secondary market.

When we heard that Acura was going to bring back the Integra, we were very excited and so was nearly every car enthusiast we knew! Acura was releasing teaser photos of parts of the car that promised good looks.  Many sources were showing proposed renderings using the teaser photos to show what the car might look like.

We saw and were drooling over renderings like this.  We wanted a compact, lightweight, nimble coupe with a high revving naturally aspirated I-4 like a K24 with a manual transmission and good suspension and brakes. 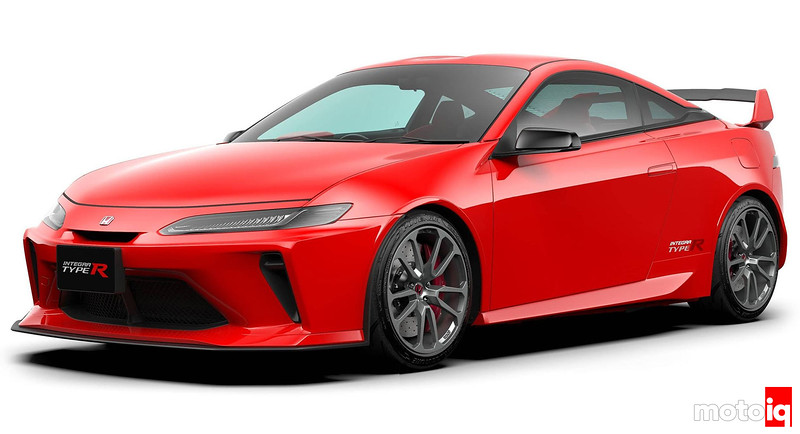 A car like this would sell like hotcakes and fill a void in the market.  A 3 door hatch would be awesome.  We knew that the DC2 can swallow a lot of stuff, like 3 mountain bikes, 3 people, and all their gear.  A tight fit but it would still fit. The back seats of the DC2 were not that bad either considering. All of this utility in a small good looking sporty coupe.  Look at these renderings Acura Product Planning people.  This is what the market wanted!

Spy shots of potentially nice-looking disguised coupe mules being test-driven on the streets by Honda engineers fueled the fire for perhaps the most anticipated new car in a long time.  Do these disguised mules look like the renderings?