The stock intake manifold was reasonably effective at pulling the heat out of the intake charge like all water to air units are. The inlet temperatures stabilized at just under 280 degrees F, while the outlet temperatures post intercooler was in the low 130’s.

Interestingly enough, the CSF/VF manifold had much lower inlet temperatures, right about 230 degrees or 30 degrees cooler than the stock manifold while the outlet temperatures were about 6 degrees cooler, under 125 degrees.  There is a lot more to the data that first meets the eye.  The lower inlet temperatures are an indicator that the restriction to airflow across the core is much lower.  This is to be expected of the larger frontal area of the core.  With less intake restriction, the compressor of the engine’s turbo is running much farther away from the surge line in a more efficient area of the compressor map.  With greater efficiency, the turbo is heating the intake air a lot less.  Since the compressor is working much more efficiently, the turbine doesn’t need to recover as much power from the exhaust stream to produce the same boost and thus there is less backpressure.  This in turn increases the engine’s total volumetric efficiency.  This is a synergistic cascade that will increase power and reduce strain on the engine and its components which has a much more profound impact than just lower intercooler outlet temperatures.

The CSF/VF intake manifold had a more consistent water temperature and a smaller range of temperatures because the core was pulling more heat out of the intake charge and the inlet temperature was much lower due to the improved turbo compressor efficiency. 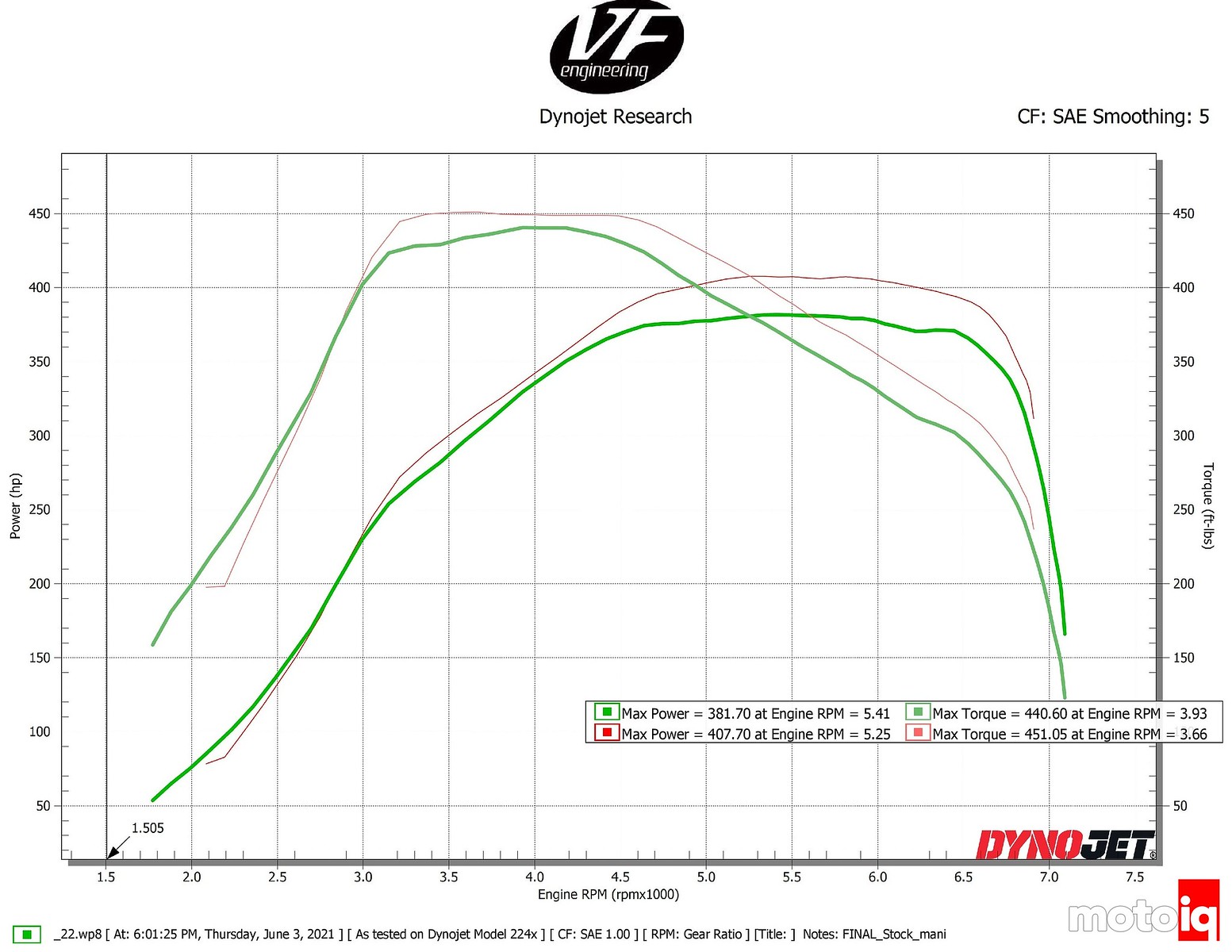 Most importantly let’s look at the difference in power output.  We had a lot of dyno data from all of the thermal saturation test runs we did.  A thing to note is the CSF/VF manifold had pretty consistent power without a lot of fade due to heat saturation compared to the stock manifold which would fade considerably over many pulls.  For our typical example of power increase, as shown here, we picked runs for both manifolds that were something like the 12th and 14th consecutive pulls, this is when the intake charge temperatures had stabilized.  We didn’t cherry-pick the runs to make the CSF/VF manifold look better, just runs that were heat stabilized and middle of the pack.  The manifold typically made around 26 hp and 10 lb/ft of torque more than stock.