I’ve owned Project S2000 for about a decade now and it is finally time to boost it. I have a particular set of requirements and none of the existing turbo kits on the market meet them. So, I decided to design my own setup. My original Phase 2 plan was to make the S2000 similar to a Porsche GT3RS in being a fully capable track car that was dead nuts reliable and be able to drive to the track and back. I was going to do: hardtop, half-cage, and a proper driving seat. Well, things change, so now I want a big power car. It’s embarrassing that the S2000 can’t pull on a Toyota Camry. Even the new Miata is faster if you’re caught out of VTEC. Let’s call this turbo upgrade Phase 2, Rev. B.

When I bought the S2000 a decade ago, the plan was always to boost it. I still have that original plan I sent Kojima way back when. Big power is a relative term. I’m only looking for double the stock power output of the S2000. I do want maximum reliability, a stock-like flat torque curve (double the torque though for double the power), and maximum response.  These requirements dictates a set of constraints on the turbo setup. Those constraints paired with my performance targets led me to design my own setup as there’s nothing on the market that meets my requirements.

My requirements: minimal relocation of components, attention to thermal management, maximum spool and throttle response, use of a catalytic converter, a mild exhaust to keep noise levels down, and 91 octane pump gas only. Due to the aim of reliability, I am leaving power on the table. The stock S2000 transmission and rear diff are not the strongest things in the world. The target power is 500 crank hp which should require about 15psi of boost given my exhaust restrictions, so we’re going lower compression which we will talk about during the engine build. 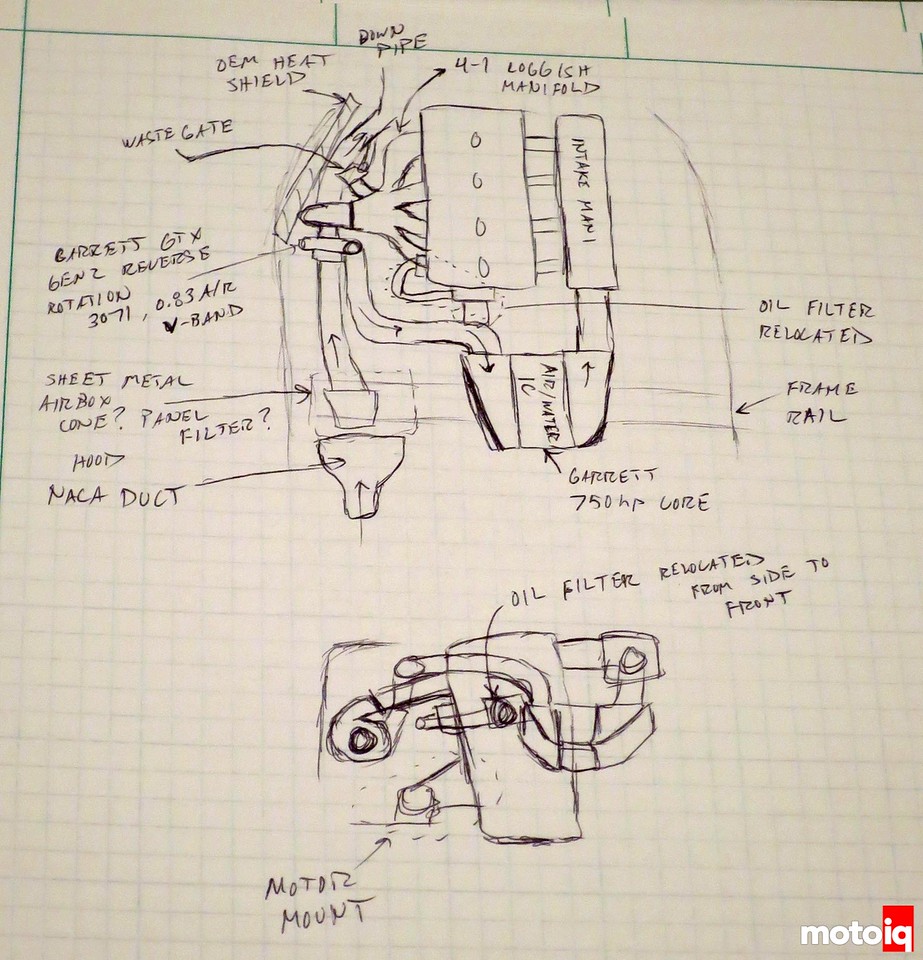 I made this sketch around two years ago with the basic concept of what I had in my head. With the reliabilty and thermal management constraints, that means a bottom mount turbo with a loggish style manifold. Bottom mount and loggish is required to maintain the stock header heat shield which protects the A/C lines, electrical boxes, and battery. Again, leaving power on the table. Also, the lower volume of the loggish manifold should have a little snappier response compared to a larger volume equal length assuming I don’t completely bugger up the design of the manifold. I’m designing the kit around the Hasport engine mount which is readily available which precludes using an equal length, 4-1 header which would hang the turbo too low. Considering all the torque the engine will be making, the Hasport mounts are also a requirement in my opinion to minimize the engine movement. Plus, I love the improvement in shifter feel with the mounts. Of course, a bottom mount turbo requires the oil filter to be relocated.  To keep the charged air piping length as short as possible for maximum throttle response, I decided on an air-to-water intercooler setup. If you’ve been following our articles from the LA Auto Show over the years, you’ve noticed the OEMs have implemented air-to-water IC setups extensively. 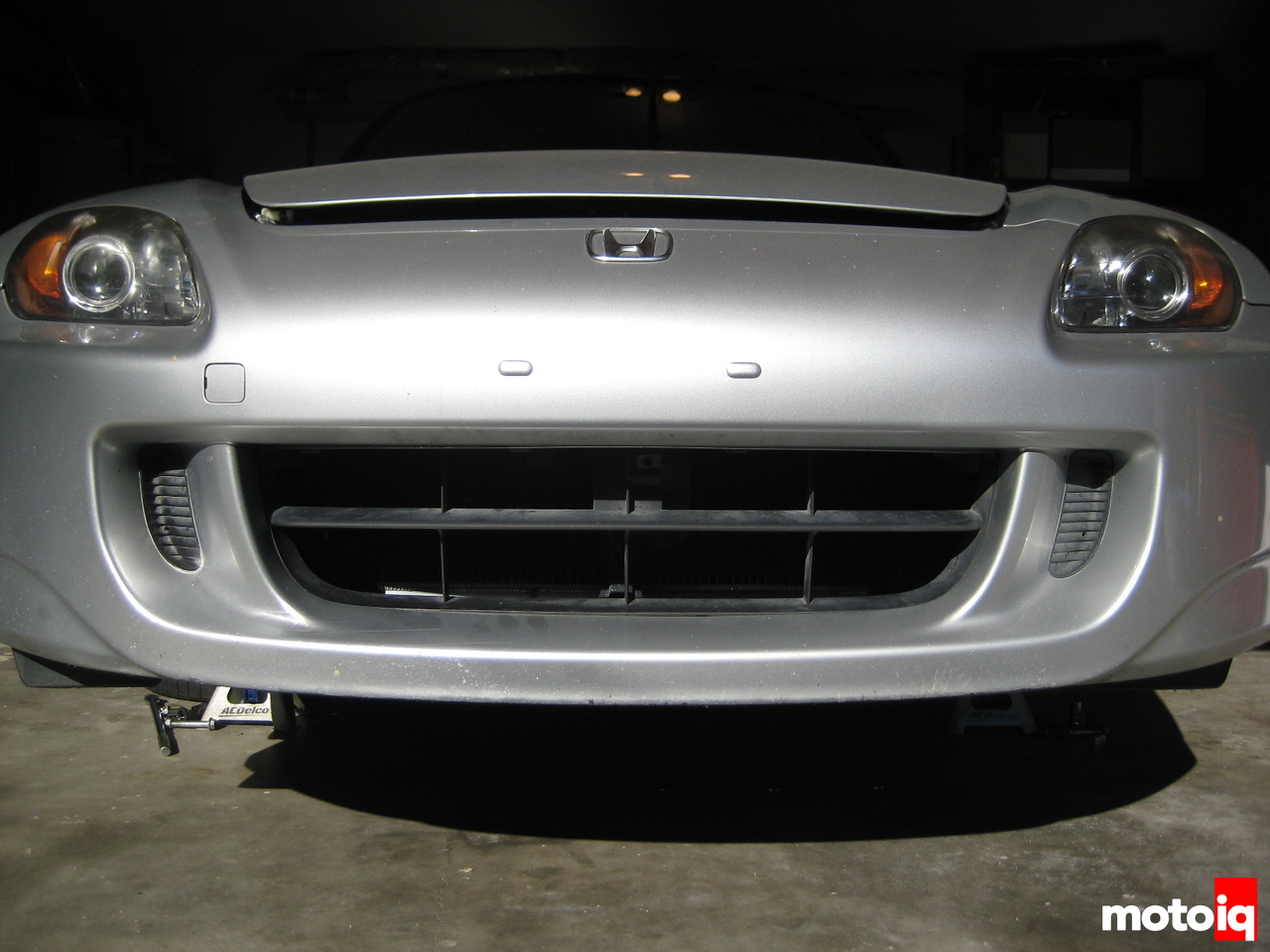 In trying to stay as stealth as possible, I’ll be reverting back to my stock street hood. So, there will be no NACA duct feeding cold air to the turbo. However, that’s why I designed my control arm mounted brake ducts so I could use the two spots to the sides of the main front bumper opening for something else. That something else is to now feed cool air to the turbo. 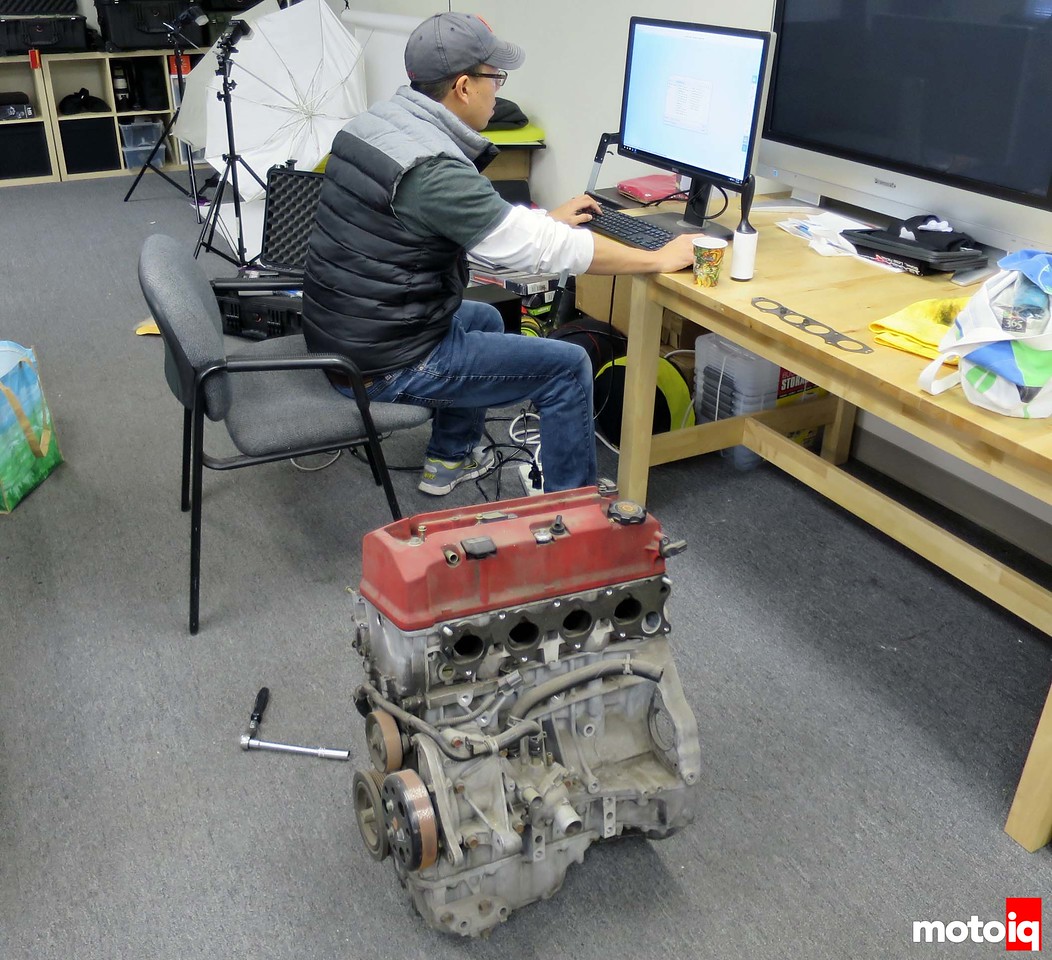 Modern design tools of 3D scanning, CFD, FEA, and rapid prototyping with 3D printing allow for very quick product development cycles and it makes designing a turbo system much easier than ever before. We like easy, so we incorporated all these tools. To get started on the 3D modeling and design of the turbo setup, we needed a model of the engine. There was a blown F20C engine sitting in the MotoIQ garage that we dragged into the office.