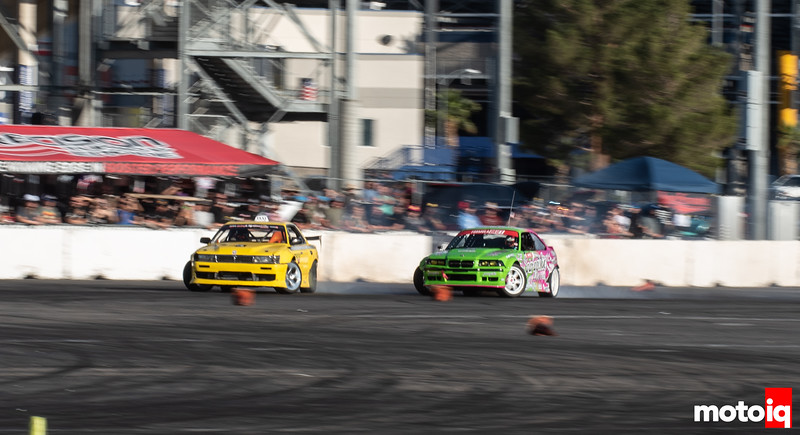 Every year Vegas Drift holds a drift competition at Holley’s LS Fest West.  We really like this event because it attracts all different levels of drivers from Pro to Local Hero.  This year was no exception and we got to witness a fierce and well-driven Top 16 elimination.  The first battle was #1 qualifier Rome Charpentier VS #16 qualifier Gatsby Racing’s Dino Child

Rome drives in Pro 1 in formula drift while Dino is a Las Vegas local Pro-Am driver.  Would a privateer’s Pro-Am car be able to hang with a super powerful and grippy Pro 1 car?

Although Dino put in a respectable showing with a great lead run, his car was no match for Rome’s Pro 1 car which probably sported several hundred more hp and more grip.  Rome opened up a huge gap during his lead run.  It was sort of like clubbing a brave baby seal. 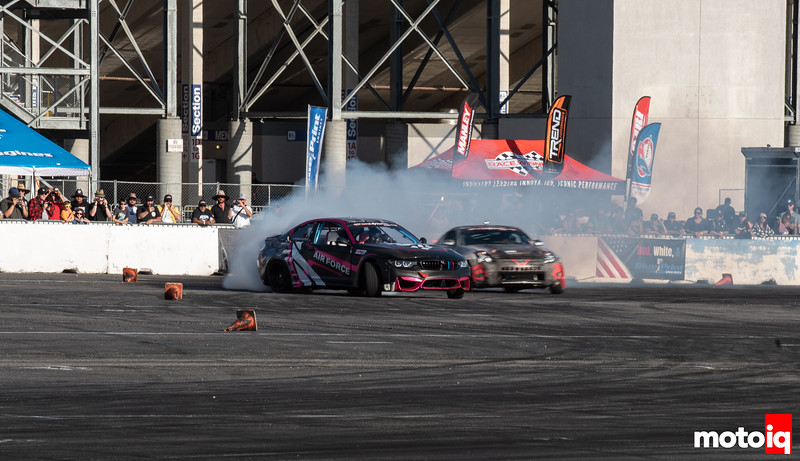 Next, it was the battle of the female drifters.  Formula Drift Pro-Spec driver, Amanda Sorensen was up against stunt woman Zandara Kennedy.  Amanda, being an FD Pro had a lot of experience in tandem battles with an excellently prepared BMW.  Pro-Spec cars by the rules run limited tire sizes and have less power than a Pro 1 car so Amanda would have less of an advantage over Zandara’s LS-powered 350z even though it is very well prepared and engineered.

Even though Zandara drove well with a decent line, her angle was shallow and she had little smoke on her lead run, she also ran a shallow line on her follow to try and keep up with Amanda. Amanda easily ran with way more angle, speed, and smoke in her lead run and followed Zandara closely on her follow for an easy win.

Next up was Formula Drift Pro 1 driver Alec Robbins vs Drift League star Daniel Albrect.  Here was another case of an experienced FD pro with a powerful car against one of the top west coast Pro-Am drivers.