Getting the Most From 91 Octane Pump Gas with a Honda K Motor, Part Three

In the last installment of our pump gas Honda K Motor project, we discussed the engines top end with a Drag Cartel cylinder head which was going to nicely complement our bottom end which was fortified with parts from JE Pistons, K1 Technologies, and King Bearings.  In this segment, we are going to assemble our engine’s long block to get it ready to drop into the RSX.

For more on our Project DC5 RSX’s K24, including all the part numbers, be sure to check out the whole series of articles:

We start with our block which has been measured for the proper piston to wall and bearing clearances, flex honed to give the rings a seating surface, and cleaned, ready for assembly

The first step in our assembly is putting the King XP main bearings into the blocks saddle.  We are keeping the bearing backs and the block saddles dry while lubing up the face of the bearing with assembly lube in preparation for dropping in the crank.

As we talked about earlier, we are using the stock K24 crank which has been measured, balanced, micro-polished and had the journals WPC treated for reduced friction and longer fatigue life. The crank journals were pre-lubricated with assembly lube and the crank was set in place in the block. 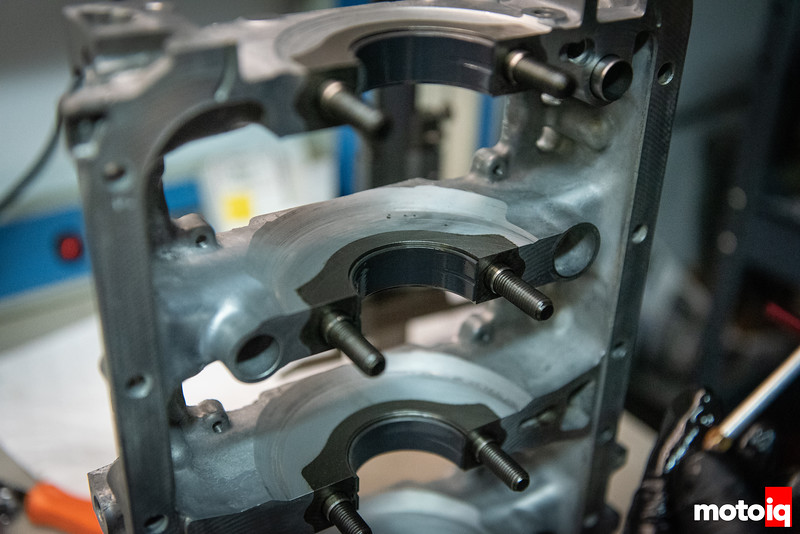 The lower King XP main bearings were set in the blocks bedplate and coated with assembly lube on their faces with their backs kept bone dry. Bedplate motors are exceptionally stiff and strong and can withstand a lot of power.

We applied sealant on the outer edges of the bedplate to prevent oil leakage to the outside of the engine.

A thin bead is all we used.  You don’t want excessive sealant to be squeezed out to where it could break off and migrate around inside the engine blocking oil passages and doing bad things like jamming the oil pump relief valve!