Giving the LS3 More Power With Comp Cams and FAST! 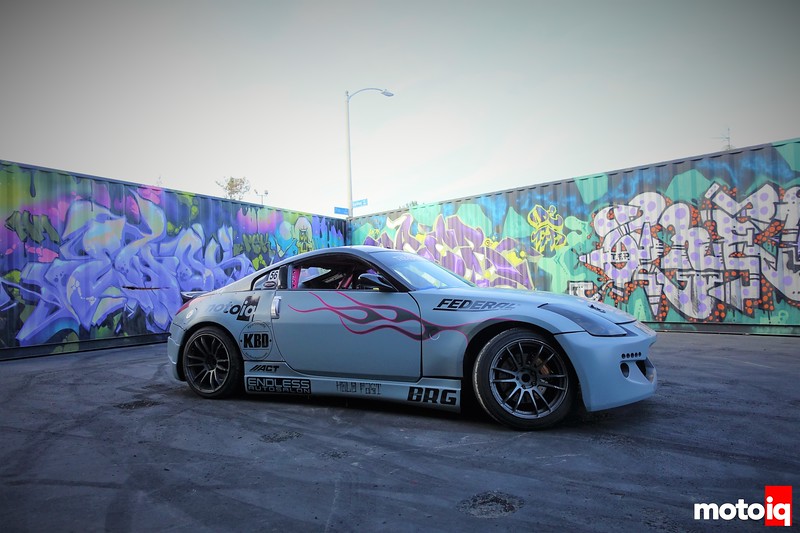 If you have been a long time reader of MotoIQ, you probably know of our Social Media Manager, Rathyna Gomer’s LS-powered 350Z drift car.  Rathyna is known around here to drive her stuff until it stops running. Well, we decided to help her because during the last Top Drift Pro-Am her car did just that.  With the car at MotoIQ headquarters, we did a quick check to find her car way down on compression.  Down to the point where it barely ran on half the cylinders.

Tearing into her car, we found that whoever built her engine had done the valve job improperly with a valve seat angle that was much steeper than the valve face angle.  This caused the valves to dig into the seats ruining the seats and the valves after just a short time running.

We also tested her injectors and found them to be hopelessly clogged and probably corroded so even cleaning them did not restore them to balanced flow. The injectors were also improperly sized to the engine, too small, so they were probably running at the maximum duty cycle.

So we had to not only get her car running but repair the damage of an improperly built engine.  While we were in there we decided to address some issues that were holding her back in competition.  Her engine had a rev limit set in her ECU at only around 6000 RPM. When the rev limit was hit the car would do an odd sort of fuel cut like someone was slowly turning the key on and off.

The low rev limit meant that she was hitting the limiter all the time where the odd, slowly cycling rev limiter would make the car want to twitch, then straighten up.  Its odd sound was also not conducive to her getting good points because her car would sound like it was sick, then it would straighten up.  Finally, her car simply lacked power which meant that she had to run the car really loose which made it slow and hard to drive in a way to get angle and good points.

We had to address this to make her driving job easier.  We had some help from the folks at Comp Cams and FAST to get Rathyna more power and a better powerband with a 7000 rpm rev limit.

Hydraulic cams use an oil filled lifter that takes up the valve lash and gives the valvetrain some give to make up for wear and thermal expansion of the valvetrain parts. This cushion means that you don’t have to worry about constantly checking and maintaining the valve lash.

The drawback to hydraulic cams and lifters is that you lose some of the fast valve action and ultimate lift and duration as quite a bit of the valve motion can be absorbed by the hydraulic cushion of the lifter.  The other bad thing is at high rpm, the lifter can pump up with oil which in turn holds the valve off its seat causing a loss of compression and misfire.  We thought that lifter pump was partially responsible for Rathyna’s odd violent throbbing rev limit.

The other serious issue a hydraulic cam is when the engine is violently held to the rev limiter for long periods of time like what is common in drifting, the wildly fluctuating lash as the lifter struggles to keep up with the revs causes rocker arms to skid off the valve tips which can lead to a lot of valvetrain damage and worst case, a rocker can knock the retainers down, dislodging the keepers and causing the valve to drop.  This can totally destroy the engine.  We have seen this happen a lot on LS drift cars and we didn’t want this to happen to Rathyna

The XR275HR13 is designed to work well from 1800 to 6800 rpm and emphasizes mid-range power. We figured it would be perfect for Rathyna’s almost stock LQ9 (The iron block truck version of the LS3 or a poor mans LS3!). The cam has some moderate specs and lower acceleration ramps to be easy on the valvetrain, important for a drift car with violent rev changes and bouncing off the rev limiter all the time.

We felt that this cam would be perfect for Rathyna’s intended use with the LQ9 with a stock bottom end.  This cam does require retuning the stock ECU for it to work properly.