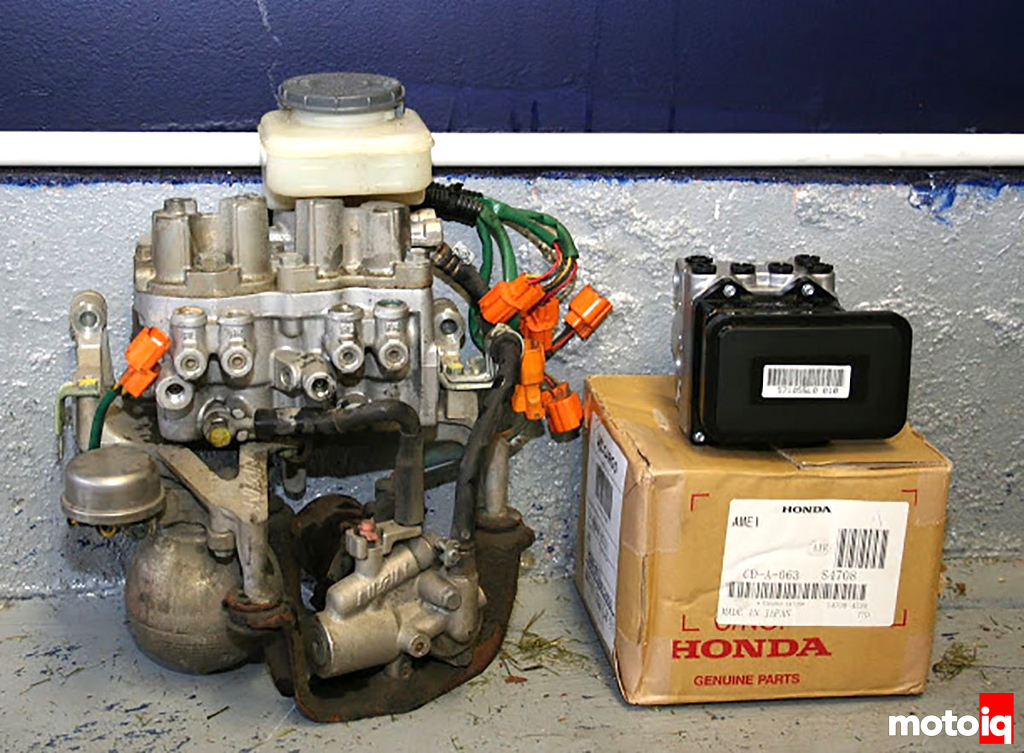 The archaic original ABS system dwarfs the modern, new pump.  The new setup sheds roughly 15lbs from the front of the car.

With the new ABS modulator installed, we were good to go.

From the moment I touched the brakes for the first time, it was apparent how much better they feel. The stiffer calipers greatly improved the communication and feedback though the brake pedal to tell you exactly what the front tires are doing.  This rises to the same standards as the amazing analog steering feel and feedback the NSX gives its driver, which is very similar to the feel of a Ferrari F40 that I recently drove.

The feedback that the PFC brakes deliver is hard to put in words if you’ve never felt brakes of this caliber.  The way you can control the balance of the car during trail braking gives you a far broader operating range to place the car exactly where you want.  Trailing off the brakes into corners with razor sharp precision allows you to rotate the car with pinpoint accuracy, since balancing a car at the limit has just as much to do with your feet (on the gas and brakes) as it does the steering wheel.

This is accomplished in part by the stiffness of the caliper, the unmatched modulation of the multi-pad caliper design, and PFC’s brake pad compounds, which are known for having some of the best release characteristics of any brake pad in the world. The combination of these elements results in control and precision that you wouldn’t know is even possible until you feel it for yourself.

Nick Eustache of Applied Motorsports drove the car and said it was by far the best braking car he’s ever experienced in his decades of working on and setting up street and track NSXs.  This was after all, the package that was developed on the record setting FXMD NSX that only I and one other driver have been able to experience up to this point.

Having good brakes that allow you to modulate and control the car better is a significant and often overlooked aspect of a car’s handling. Any true enthusiast will get almost as big of a smile from the solid feel and response of a proper braking system as they do from a strong engine that pins them in the back of the seat.

In addition to the Performance Friction brakes; the new 2000+ ABS Upgrade was a worthwhile improvement.  The brakes now react, respond, and perform like a modern performance car, with far more control than the archaic original setup.  I highly recommend anyone who owns a pre-2000 NSX to upgrade their ABS to this unit.  There are no downsides whatsoever and it will make the car safer in emergency situations, especially in the wet, as well as improve consistency and lap times for most drivers on track.  Stay tuned for the next installment, where our Project NSX gets a major makeover!