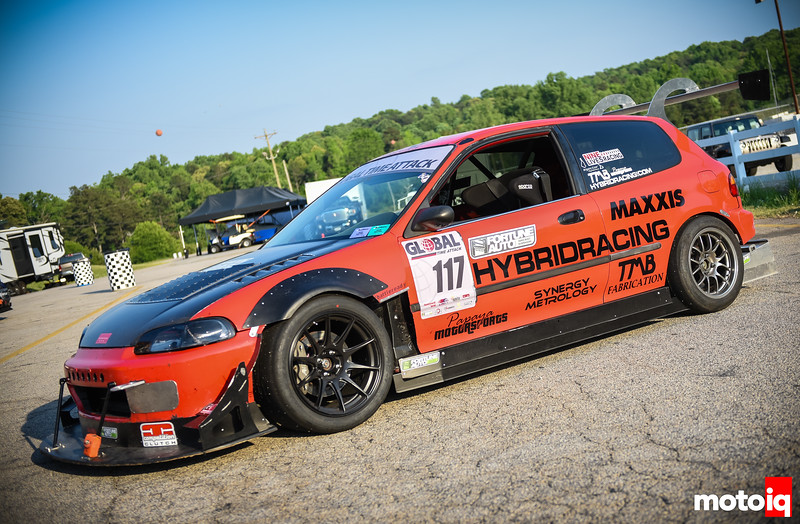 There’s actually nothing tragic about the orangeish-reddish TMB Fabrication EG Civic itself. Thruxton Booth’s one-man show, TMB Fabrication, built something really awesome. The tragedy actually came in 2017 when Thruxton was en-route to #GRIDLIFE South from his Chattanooga, Tennessee home base. His tow rig somehow caught fire and burned all the way to the ground — with his tools and equipment inside. Fortunately for TMB, the fire department showed up just in time to save the trailer with the race car inside.

While Thruxton readily admits that the EG is “not [his] finest work”, he still managed to come away with a Limited FWD class win in that 2017 event with it, even after watching most of his well-being smolder on the side of the highway.

With a 1:33.577 in Track Modified FWD (a then class record for Road Atlanta), TMB Fabrication vowed to keep at it, and the car you see here is what has become of their EG Civic. Booth grew up with an artist father and a workshop at his disposal, so fabrication has been a thing for him since childhood. A stint in college for Mechanical Engineering with a part-time job as a CNC machinist/programmer rounded out the skill set. Not bad, considering that TMB isn’t Booth’s main job or even really a source of income.
Let’s dive in.

After an 11,000 RPM money shift, Thruxton did a light rebuild on the K20 just in case, even though it still ran fine. The rod and main bearings were replaced with ACL Race components, and fasteners were upgraded with ARP units. Outside of that, all of the “hard” engine internals are stock (pistons, valves, rods, cams, etc). Even the head gasket is stock, despite being a boosted application.

Running the K-swap way back when in NA trim and on small, less sticky tires, and cruising around Atlanta Motorsports Park’s long, long and high-speed turn 14, Thruxton noticed rather low oil pressure. Under 20PSI when spinning 8000 revs is probably not great for engine longevity. Because of the design of the K-series pan and engine, long left-handers like this can allow oil to get away from the pickup. This spurned the decision to add some oil protection knowing that the future only held more G-forces in store.

TMB designed a laser-cut baffle that blocks off the bottom of the timing chain cover (preventing oil from going up and away from the pan into the cover area), but still allows oil to get down back into the pan. Additionally, he utilized a trap door in-pan baffle from a supposedly high-end company that he ended up modifying to make it work correctly. In the end, the accumulator ended up just being used for pre-oiling on engine start since the baffles solved the on-track pressure issues.